The FA’s chief executive has indicated that England may back down from wearing the planned “One Love” armbands in the face of potential sanctions from Fifa that go beyond a fine.

There are discussions that are carrying on. We are working through those issues right now. It is true to say that Fifa did indicated yesterday that there could be sporting sanctions, that’s obviously something that we have to work through. We have been clear that we want to wear the armband. It is important to us. But equally we need to work through all of the discussions right now and see where we end up. Is it a risk for Kane to wear the armband? That’s what we’re working through right now.

We’ve had meetings this morning with Fifa are there are discussions carrying on. As I’ve said we are very keen to wear the armband, we want to do it but obviously we would need to consider the implications. Normally in this kind of situation there would be a fine that would get paid and we’ve always said we’d be very happy to do that. Well, happy might be the wrong word but we’d be prepared to pay the fine because we think it’s important to show our support for inclusion. If the sporting sanctions threat is real then we need to look at that, we need to step back and work out if there is another way in which we can show out values.9m ago

If you were managing Portugal, you might be forgiven for being a bit terse about Cristiano Ronaldo blowing up your preparations with the huge row he has stoked with his club, Manchester United, over that interview. Ronaldo has been up before the media, and was pretty defiant about it. Reuters quotes him saying:

In my life, the best timing is always my timing. I don’t have to think about what other people think. I speak when I want. The players know me really well for many years and know the type of person I am.

It’s an ambitious group that is hungry and focused. So I’m sure [the interview] won’t shake the changing room’s concentration and focus. I’m feeling great, I’m recovered and I’m training well and ready to start the World Cup in the best way possible.

I feel that this Portugal squad has amazing potential. I think we can win for sure, but we need to focus on the next game. So, it’s focusing in Ghana, get a win and go from there. 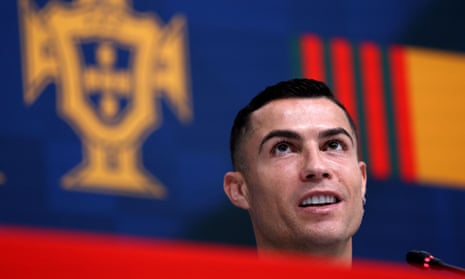 Cristiano Ronaldo in front of the press in Qatar.

Those of you of a certain vintage might remember Ben Elton dropping the phrase “little bit of politics” into his stand-up routines, and I am about to do that now, because this morning the UK’s immigration minister Robert Jenrick has been asked about the prospect of England and Wales players taking the knee or wearing inclusive armbands while they are out in Qatar. He told viewers of Sky News:

I’m fine with that. I think that’s a choice for Harry Kane and the team, as indeed for Wales as well. These are their choices. It is not for the government to tell them what to do. and I think when you’re playing in a country like Qatar which does have different standards in the way it treats for example the LGBTQ community, it’s perfectly legitimate for the England or Welsh team to make that stand.

That is quite a contrast to the approach before the last Euros, when the then home secretary Priti Patel described taking the knee as “gesture politics” and then prime minister Boris Johnson declined to criticise fans who booed it. One Conservative MP, Lee Anderson, even said he was boycotting watching England in the tournament over the issue – although it turned out once they reached the final he did say he would be checking the score on his phone.

Before we get into previewing today’s matches, there is some good news for Ecuador fans and anybody who immediately lumped some money on Enner Valencia for the golden boot after the 31st minute of yesterday’s match – he has said he thinks he will be fit to face the Netherlands.

Reuters is carrying a quote from the 33-year-old former West Ham striker saying “I have some discomfort in my knee and ankle. The doctors will assess and see how serious it is. I hope to play in the second game against the Netherlands.”

With his brace, Valencia became the fourth player in the last five World Cups to score twice in the opening game of the tournament, after Germany’s Miroslav Klose (2006), Brazil’s Neymar (2014) and Russia’s Denis Cheryshev (2018).

Welcome to our live coverage of day two of the weirdest World Cup of all our lifetimes to date.

After an explosive start – including some baffling VAR – yesterday’s opening match settled down into a rather unambitious dull affair. Ecuador may ultimately regret not pushing harder to rack up more goals in a group where only two of the Netherlands, Senegal and Ecuador can progress.

We have got a busy day ahead. There should be media appearances from teams playing on Tuesday, which includes holders France, much-fancied Argentina, dark horses Denmark and the Socceroos.

And there is the small matter of three matches today. England kick off against Iran at 1.00pm GMT hoping for more of the spirit from the second half of that 3-3 Nations League draw with Germany at Wembley in September than the humiliating home thumping they got off Hungary during the summer.

At 4pm GMT Netherlands and Senegal face each other. You suspect that neither of them saw anything Sunday from Group A’s other teams to make them doubt they will ultimately both progress to the knockout stages.

And last, but very much not least, at 7pm GMT Wales kick off their first match at a World Cup finals since losing 1-0 to Brazil in a quarter-final in Gothenburg in 1958. They face the USA.

The main debate around those England and Wales games right now isn’t so much whether Jack Grealish will play and what formation Wales will set up in, as what Harry Kane and Gareth Bale will be wearing on their arms. As my colleague Jacob Steinberg reports from Doha, England’s players will take the knee before the game, but Kane must decide whether to support LGBTQ+ rights by wearing the “OneLove” rainbow captain’s armband the FA have been promising, or wear the Fifa-mandated armband message, amid fears that the gesture could earn him an instant booking. You can read more here.

This is Martin Belam in London. I have spent most of this year live blogging countless unnecessary deaths, human rights abuses, corruption and people struggling to get hold of the basics for life like drinking water. So for a complete change of scene, here’s the World Cup in Qatar.