What Kanye West did: Antisemitic remarks, criticism and repercussions

What Kanye West did: Antisemitic remarks, criticism and repercussions

Kanye West is experiencing a backlash after making a series of antisemitic remarks during interviews and on social media.

The rapper, who has been involved in various controversies over the years, has been dropped by both Adidas and Balenciaga over the “hateful and dangerous” comments. A number of fellow celebrities have also condemned his behaviour.

Following backlash online, West – who has legally changed his name to Ye – began sharing antisemitic conspiracy theories on Instagram, including suggesting that rapper Diddy was being controlled by Jewish people.

When his account was suspended, West tweeted that he was going to go “death con 3 On JEWISH PEOPLE”.

He added: “The funny thing is I actually can’t be Anti Semitic because Black people are actually Jew also. You guys have toyed with me and tried to black ball anyone whoever opposes your agenda [sic].” His Twitter account was also suspended.

At the time, Alexandria Ocasio-Cortez commented: “There is absolutely no room in this country or world for antisemitism… We must reject this [rubbish emoji] wherever we see it.”

Lizzo and John Legend were also among the earlier celebrities to call out West, with Legend tweeting: “Weird how all these ‘free, independent thinkers’ always land at the same old anti blackness and anti semitism.”

Weird how all these “free, independent thinkers” always land at the same old anti blackness and anti semitism.

West stood by his comments, adding to them by claiming that he “doesn’t believe” in the term antisemitism.

Later in the month, the rapper appeared on the Drink Champs podcast, where he continued to share conspiracy theories.

West claimed that George Floyd, who died at the hands of a Minnesota police officer, actually had taken the drug Fentanyl and that a police officer’s knee “wasn’t even on his neck like that”. In response, the mother of Floyd’s daughter sued Kanye West for $250m.

Elsewhere in the interview, West shared a number of antisemitic conspiracy theories and dog whistles, and claimed that he’d been “blocked” by the “Jewish media”.

The episode was later deleted, with host N.O.R.E apologising and claiming that the most offensive comments were not meant to have made the final edit.

West then appeared on Piers Morgan’s TalkTV show on Wednesday (19 October) only to call the presenter a “Karen” when he was challenged on his antisemitic comments.

During the interview, Morgan asked West if he regretted tweeting his “death con 3” comments.

“No, absolutely not,” he responded. “I fought fire with fire. I’m not here to get hosed down.” However, he added that he was “sorry for the people that I hurt” and the “confusion that I caused”.

In response to West’s podcast comments, many public figures began to speak out against his actions and wider cases of antisemitism.

Friends star David Schwimmer posted on Instagram: “Whether or not Kanye West is mentally ill, there’s no question he is a bigot. His hate speech calls for violence against Jews. If you interpret his words any other way and defend him, guess what? You are racist.”

West was diagnosed with bipolar disorder in 2016 and has spoken openly about living with the condition.

Schwimmer continued: “If we don’t call someone as influential as Kanye out for his divisive, ignorant and anti-semitic words then we are complicit. Silence is complicity.”

The fashion world began to turn its back on him too, with Balenciaga announcing on Friday (21 October) that it “no longer has any relationship nor any plans for future projects related to this artist”.

Vogue also said that neither the publication or editor Anna Wintour had no intention of working with West again.

After Balenciaga severed ties with West, the rapper hired lawyer Camille Vasquez to represent him.

However, on Monday (24 October), TMZ reported that Vasquez – who represented Johnny Depp in his recent defamation case against Amber Heard – had told her firm that she was not willing to represent West following his comments.

Things heightened over the weekend after a reported white supremacist group showed support for West and his antisemitic remarks by hanging a banner over a busy Los Angeles motorway.

The banner was reportedly hung above Interstate 405 by the Goyim Defense League and read: “Kanye is right about the Jews.”

According to the Anti-Defamation League, the organisation comprises a loose network of antisemitic conspiracy theorists, while photographs also show people performing Nazi salutes next to the banner.

Photos of the incident were widely circulated online, with social media users saying they proved that people were taking West seriously and he couldn’t just be ignored.

Many notable figures, including Florence Pugh, were among those condemning the “appalling” banner.

“Any form of hate speech only encourages it, it grows and spreads like a disease,” she wrote. “Any whisper of antisemitism is dangerous and needs to be addressed and taken down.” 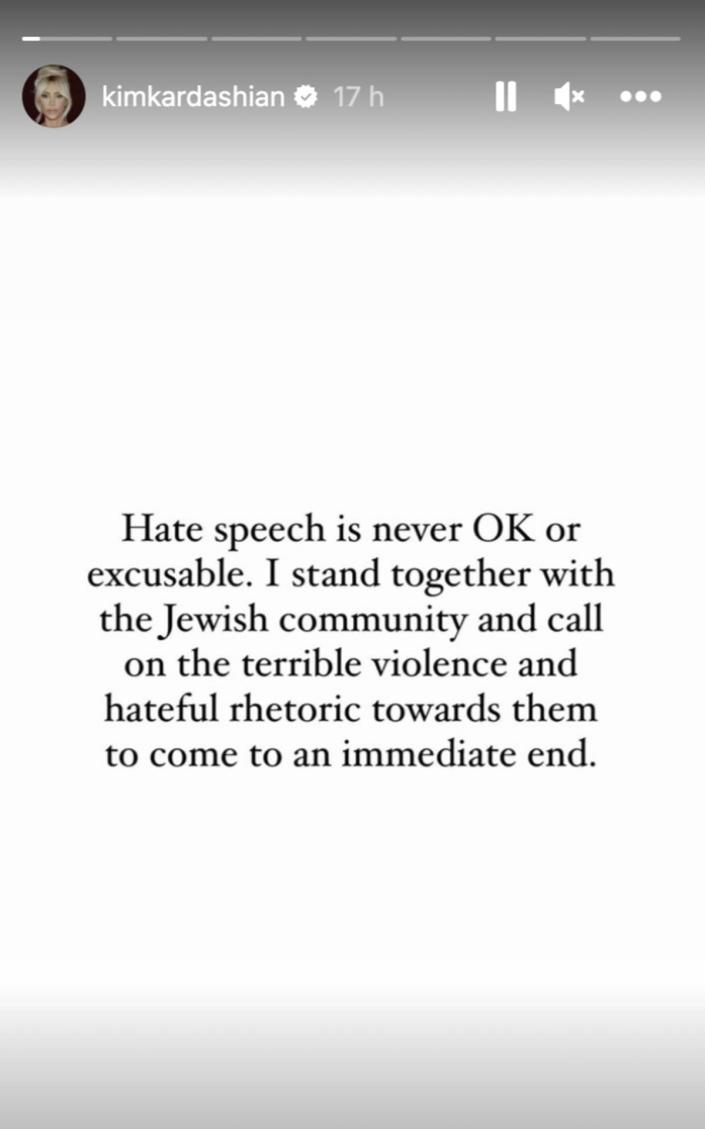 He was dropped by CAA, one of the biggest celebrity talent agencies in the US, on Monday 24 October.

Among the celebrity protesters, many specifically backed calls for Adidas to cease working with West.

In the since-deleted Drink Champs episode, West had bragged that he could maintain his partnership with the sportswear brand, no matter what he said.

“The thing about it being Adidas is I can literally say antisemitic s*** and they cannot drop me,” the rapper said. “Now what?”

Breaking News: Adidas cut ties with Kanye West, ending what may have been his most significant corporate fashion partnership after he made antisemitic remarks.https://t.co/tHA3Y1QWp3

“Adidas does not tolerate antisemitism and any other sort of hate speech,” the statement read. “Ye’s recent comments and actions have been unacceptable, hateful and dangerous, and they violate the company’s values of diversity and inclusion, mutual respect and fairness.”

The company, which is based in Germany, said it would end production of Yeezy branded products and stop payments to West and his companies. In terminating the contract, Adidas said they expected to lose out in €250 million (£217 million) in profits this year.

Forbes reports that the termination of the contract means West is no longer a billionaire, with his net worth falling from $2bn (£1.74bn) to $400m (£348m) overnight.

Later on Tuesday, Gap announced that it was taking “immediate steps” to remove merchandise from West’s Yeezy Gap collaboration from its stores. The company has also shut down its YeezyGap.com website, which now redirects back to the Gap homepage.

“Our former partner’s recent remarks and behavior further underscore why,” the company said.

Amid reports that West’s music was about to be removed from Spotify, the company’s CEO said on Wednesday (26 October) that, while West’s comments were “awful”, his music will remain available for subscribers as long as his label permits it.

In London, Madame Tussauds removed its wax figure of West from public view.

Later that day, footwear company Skechers claimed that the rapper had turned up unannounced at their headquarters in Los Angeles and had to be “escorted out” of the premises.

The company said he had “engaged in unauthorised filming” at their offices, adding: “Skechers is not considering and has no intention of working with West.”