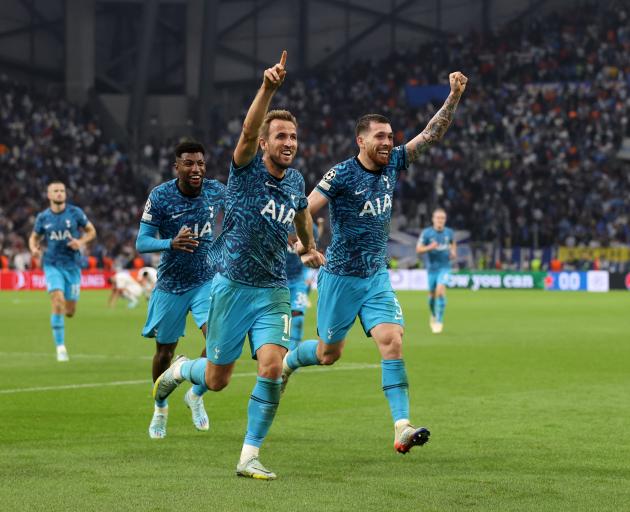 The Londoners, who needed only to avoid defeat to go through, endured a first-half siege and trailed to Chancel Mbemba's header in stoppage time before the break.

However, French central defender Clement Lenglet proved to be Tottenham's saviour when he headed in his first goal for the club in the 54th minute to level the scores.

Spurs, who lost forward Son Heung-min to a head injury in a torrid opening period, were a different proposition after the interval and took control after Lenglet's equaliser.

Pierre-Emile Hojbjerg struck the crossbar for the visitors but Marseille should have scored late on when Sead Kolasinac somehow missed an open goal with a header.

Hojbjerg then sealed the victory in stoppage time to put Tottenham top of the group and leave Marseille, who at one stage of the evening sat top, in fourth spot and out of Europe.

It was a result that barely looked possible in the opening 45 minutes as Spurs appeared dazed and confused by Marseille's relentless onslaught.

"To be honest, we expected that type of game. The Stade Velodrome is a very difficult place to deal with and I think we showed great personality," Tottenham keeper Hugo Lloris said.

"It was a tough night, a great battle and even more psychological battle because we could feel in the first half a team was playing without the fear to lose, it was Marseille, and in the second half we face a team with the fear to lose."

The result saw Spurs win the group on 11 points ahead of Eintracht Frankfurt with 10, Sporting seven and Marseille six.

The Virage Nord section that usually houses Marseille's ultras was closed because of crowd trouble against Frankfurt but the noise was still deafening from the first whistle.

Only a victory would do for the home side and they set about trying to get it in frenzied fashion, swarming all over Spurs whose coach Antonio Conte had to sweat in the stands after his red card in last week's draw with Sporting.

Former Arsenal forward Alexis Sanchez almost scored in the third minute with a deft header that drifted wide and soon after produced a great turn and shot to force a save from Lloris.

Lloris also kept out Jordan Veretout's fierce volley and Tottenham's night took a turn for the worse when South Korea forward Son had to go off after a nasty collision with Mbemba.

Spurs could hardly get a kick and were hanging on and hoping for the halftime whistle when Mbemba rose high into the air and flexed his neck muscles to thump a header past Lloris from Veretout's cross to give Marseille a deserved lead.

At that stage it was hard to see how the visitors could recover but they were transformed after the break.

Lenglet, who is on loan from Barcelona, headed in Ivan Perisic's pinpoint delivery to get Tottenham level and their confidence levels soared.

They remained in a precarious position as a goal could still have taken Marseille through and left Spurs in the Europa League and the hosts came close several times, notably when Kolasinac was picked out at the far post but headed wide with the goal at his mercy.

With Frankfurt winning against Sporting in Lisbon, a draw would have given Marseille the consolation of a Europa League place but even that was snatched away in the fifth minute of stoppage time when Kane released Hojbjerg who finished clinically past Pau Lopez to send the visiting fans wild. 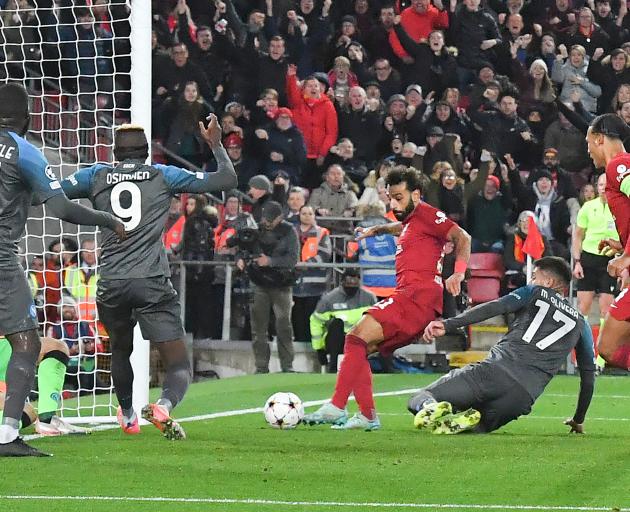 Liverpool's Mohammed Salah turns the ball into the back of the net against Napoli. Photo: Getty Images

Late goals from Mohamed Salah and Darwin Nunez earned Liverpool a 2-0 victory over Napoli this morning but it was not enough to deny the Italians top spot in Champions League Group A.

Both teams had already sealed a knockout-stage spot, but first place in the group, and a potentially more favourable last-16 opponent, was still up for grabs, with Liverpool needing to beat Napoli by four goals or more to sneak to the summit.

The first half felt like an encounter where both teams' main priority had been fulfilled, but the game sprang to life early in the second when Leo Ostigard thought he had put Napoli in front, only for his header to be ruled offside after a VAR check.

With nothing to lose and top spot out of reach Liverpool did at least manage to secure victory on the night, with Salah prodding home at the far post five minutes from time, before Nunez added a second in stoppage time.

Napoli's 4-1 demolition of Liverpool in their group opener in September proved crucial in the end, as they finished on 15 points, the same as Liverpool, but with a better goal difference in clashes between the pair.

"That was the reaction I wanted to see," Liverpool coach Juergen Klopp said after seeing his side struggle domestically so far this term.

"We don't doubt our quality, I don't think anyone doubts that, but part of the problem is we show inconsistency.

"It was the worst possible start to this group with the performance against Napoli. They deserved the first place in the group."

When the draw was made, few would have tipped Napoli to be group winners ahead of last season's finalists Liverpool, but Luciano Spalletti's team have been in sensational form right from the start of the campaign.

Napoli travelled to England unbeaten in all competitions all season, having won their last 13 games in a row – a run stretching back to before their humiliation of Liverpool in September.

They took a more reserved approach from the off at Anfield, happy to sit back and invite pressure from the hosts.

Nigerian striker Victor Osimhen, who had scored six goals in his previous four games in all competitions, should have done better from a good position in the first half, before Liverpool countered and Thiago Alcantara brought a fine save out of Alex Meret in the away goal.

The game needed something to ignite it, and Napoli's overturned opener did just that, with the Italians frustrated by how long the decision took to make.

Liverpool stepped it up a gear after that, with Nunez making a real difference when he came off the bench.

It was the Uruguayan whose header was saved before Salah prodded in, and he showed his poacher's instincts at the death to tap home, a goal awarded following another lengthy VAR review.

Salah has now scored 43 Champions League goals and is just one goal away from equalling Didier Drogba as the top scoring African player in the competition.

"We are proud of getting through such a difficult group, not only getting through but topping it," Spalletti said. "I think we kept the game very even, we created chances for ourselves, we suffered in moments.

"We were playing a giant like Liverpool at Anfield. I can only say well done to my players."