There are World Cup soccer fanatics. And then there is Bertha Alicia Guzmán.

Seven times this Latina transplant from Guadalajara has spent a small fortune to go watch her beloved, eternally heartbreaking Mexico national team take part in soccer’s quadrennial showcase. Along the way she has made friends and collected memories from Brazil to Russia, South Africa to South Korea.

Now she’s off to Qatar, the tiny Middle Eastpeninsular nation that will host the Copa Mundial from Nov. 20 to Dec. 18. Guzmán said that this World Cup, her eighth, is shaping up as her most expensive. So far she has spent approximately $8,000 on match tickets, airfare and lodging.

No importa. She’s thrilled because she got VIP tickets for Mexico’s three opening-round games. During her two-week stay in Doha, the capital city, she’ll get to take in several other matches, including Portugal versus Uruguay, the U.S. versus Iran, Spain against Costa Rica and the Brazil-Cameroon encounter, before returning to California in early December.

How does she prepare for such a football-bingeing marathon?

“I’m quite disciplined,” replies the frequent flier, who seldom passes up a chance at a top-flight soccer match or a long-distance sojourn. She recently returned from Morocco, the 90th country she has visited.

The Seven Wonders of the World? She’s been there, done that, too.

“I love to travel. I work to travel,” said the Torrance resident. 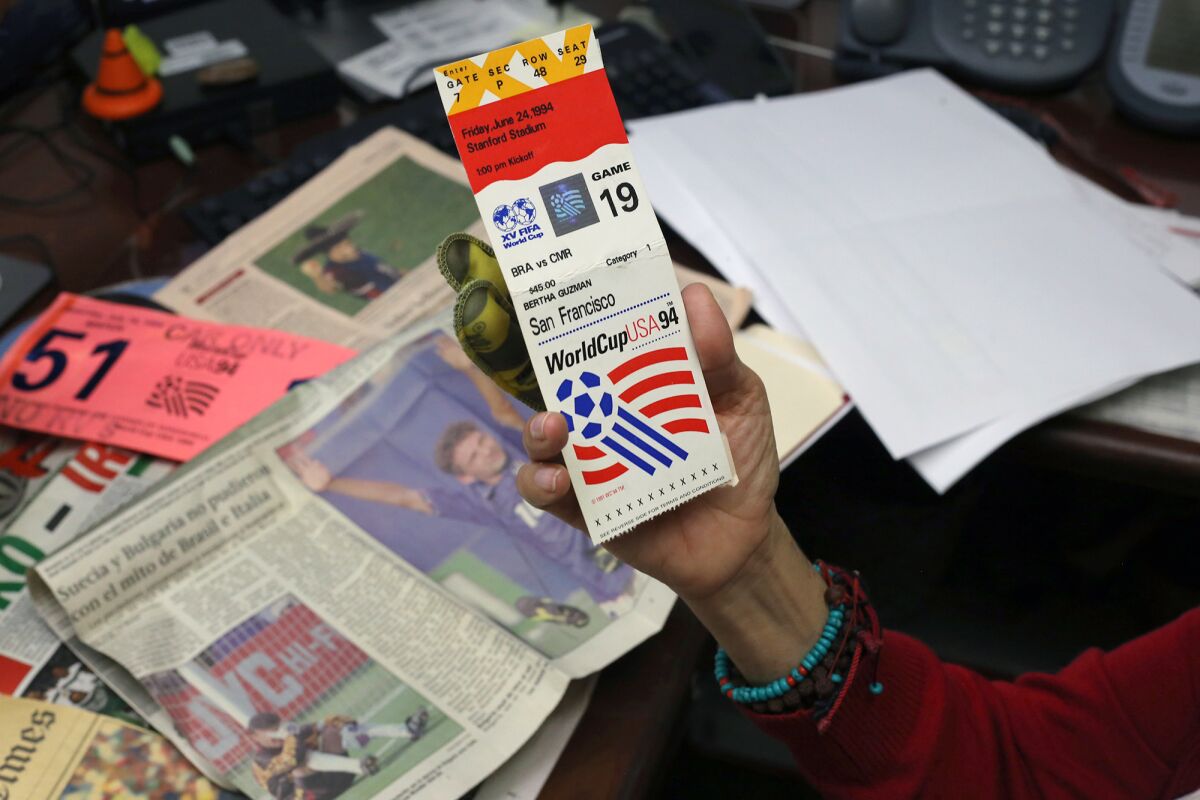 Among Guzmán’s souvenirs is a ticket from the 1994 World Cup, which the United States hosted.

Most of that work has been in sales and marketing in the supermarket industry. Drop by her office and you can’t fail to see her World Cup mementos: not overpriced mass-market tourist souvenirs, but cherished photographs, newspaper clippings, ticket stubs.

For a while Guzmán also collected Panini stickers of World Cup players and pasted them in books — a beloved pastime of soccer aficionados across the globe. But she realized that if she continued to hoard like that, she’d have to go live on her patio and turn the rest of the house over to her soccer memorabilia. Still, among her prized possessions is a vuvuzela from South Africa 2010, little towels from Japan 2002, and bracelets from Russia 2018.

“A person changes,” she said. “I’ve passed that stage.”

Guzmán has been a soccer fan since childhood. She became addicted to the game under the influence of a neighbor in Guadalajara. She and her siblings started taking in matches, and she started following Chivas, still her favorite club. She has never played the game herself.

Her World Cup fixation came about randomly. Barely two years after she settled in Los Angeles, Southern California helped host the 1994 World Cup, including the final match between Brazil and Italy at the Rose Bowl.

Guzmán volunteered with the World Cup organizing committee, and “when the tournament started, they gave us tickets,” she said. In that World Cup she was able to see the United States defeat Colombia 2-1, as well as the final, which Brazil won on penalty kicks.

That event on American soil made her unstoppable. A group of 20 friends that she’d made vowed they’d all rendezvous in France for the 1998 World Cup. But when the time came, only two others — one from Guatemala and one from the U.S. — reunited with Guzmán in Paris.

“We went there without game tickets. We just had lodging and our flights, nothing else,” she said. She ended up buying resale tickets, for about $200 apiece, and took in four matches. 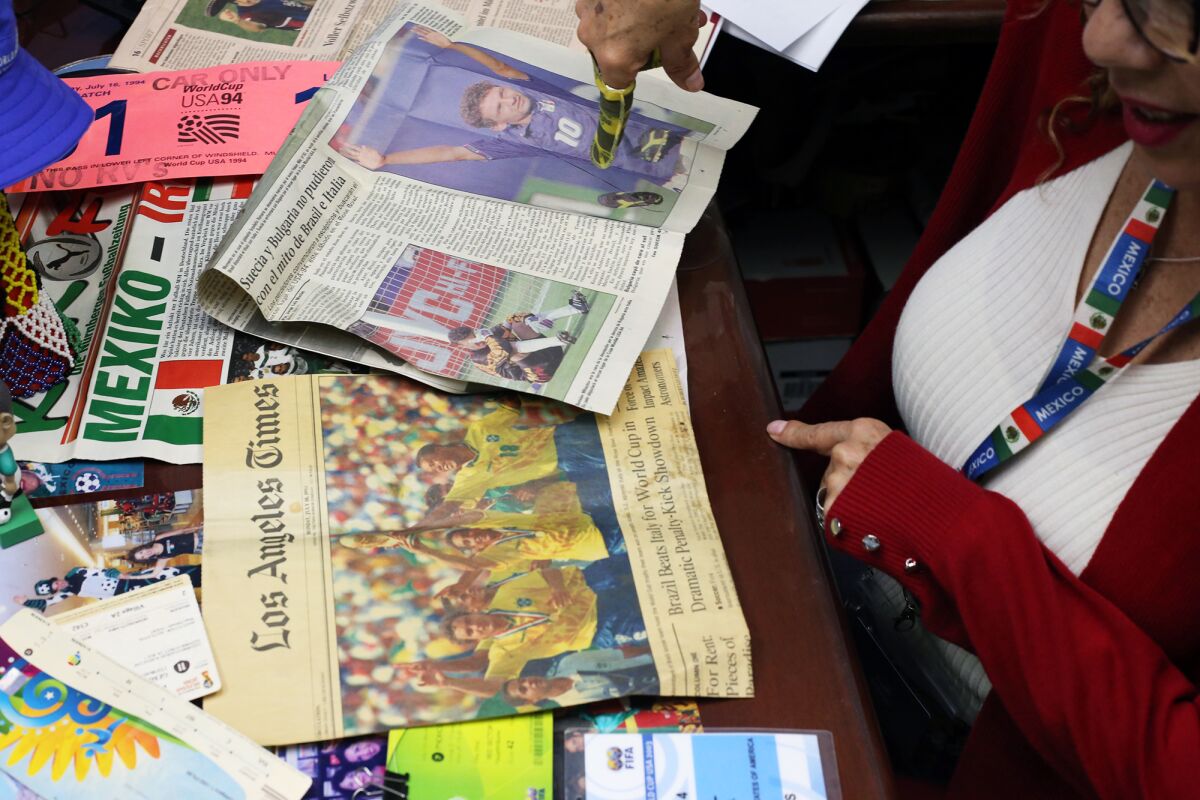 Guzmán sifts through newspaper clippings of World Cups past.

Guzmán got married in the interval between the ’98 World Cup and the 2002 tournament. After a year the husband was history, while her true passion remained.

“I am happily divorced, because my ex-husband didn’t like soccer,” she said with a laugh.

That visit to Teutonic lands exceeded her expectations. Guzmán said the stereotype that Germans are stand-offish is way off the mark. She thinks many World Cup fans that summer, including her, were struck by the overflowing cordiality, both of the organizers and the nation’s inhabitants.

For instance, while she was watching the Portugal-Mexico match at the Veltins-Arena in Gelsenkirchen, older Germans took delight in the lively Mexican fans, whipping out cameras to record “the crazy things we were doing, the painted faces, dancing, drinking. They looked at us with a smile.”

“Germany put together an incredible World Cup,” she said. “They were excellent hosts.” 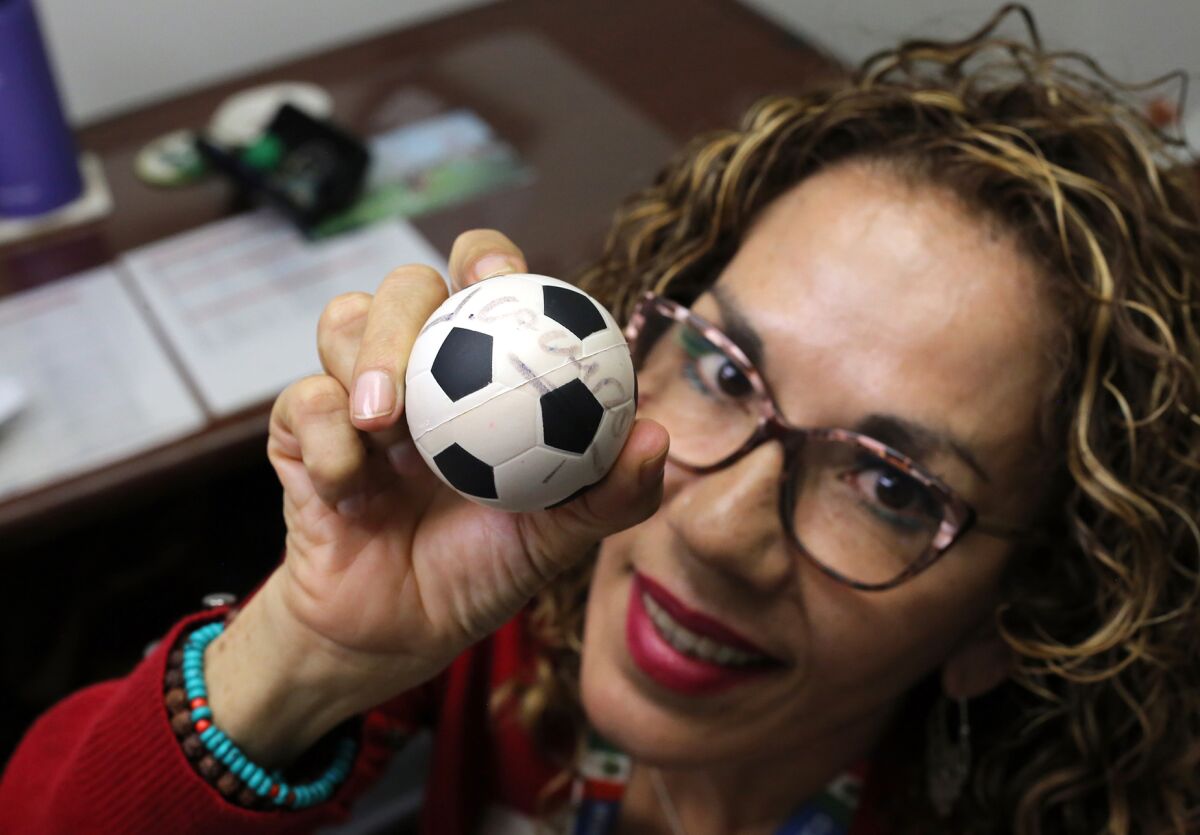 After having lived through seven of them, Guzmán advises those who want to go to a World Cup to begin preparing as soon as the previous tournament ends. Start saving up money and register on the official FIFA website.

Waiting until the last minute “is expensive and becomes a nightmare,” she warned.

In Qatar, she’ll of course be rooting for Mexico and her second-favorite team, Brazil. But she insists that whether those teams win or lose, the emotional high of a World Cup has few if any equal.

“It’s something beautiful: coexistence, cordiality, partying, exchanging shirts, taking photos with other people and living with people from other cultures,” Guzmán said. “It should always be like this. May the world and human beings always get along like this.”