Giorgia Meloni, Italy’s first female Prime Minister, was sworn in on Saturday alongside her cabinet.

Meloni, the leader of Brothers of Italy, a party with neofascist origins, has taken the helm of the country’s most right-wing government since WWII.

Meeting with the outgoing Prime Minister Mario Draghi on Sunday for a formal handover ceremony, Meloni said: “I did not expect this welcome … It’s an emotionally impacting thing.”

The pair held private talks for over an hour before Draghi handed Meloni a small symbolic bell used during cabinet debates.

In a tweet, Meloni wrote: “It begins. With great emotion but also with the awareness of the difficult challenges that await us.”

In a tweet, Leyen said she had “a good call” with Meloni after she took office and that the pair “will work together to address the critical challenges of our time from Ukraine to energy”.

For his part, Mitsotakis said: “Warmest congratulations to Italy’s new Prime Minister Giorgia Meloni. Looking forward to working closely together for the benefit of our Euro-Atlantic family and the stability of our region.”

Warmest congratulations to Italy’s new Prime Minister @GiorgiaMeloni. Looking forward to working closely together for the benefit of our Euro-Atlantic family and the stability of our region.

45-year-old Meloni takes power as Italy’s debt-laden economy is once again headed into recession, businesses buckling under the weight of soaring energy bills, and splits within her coalition over the war in Ukraine. 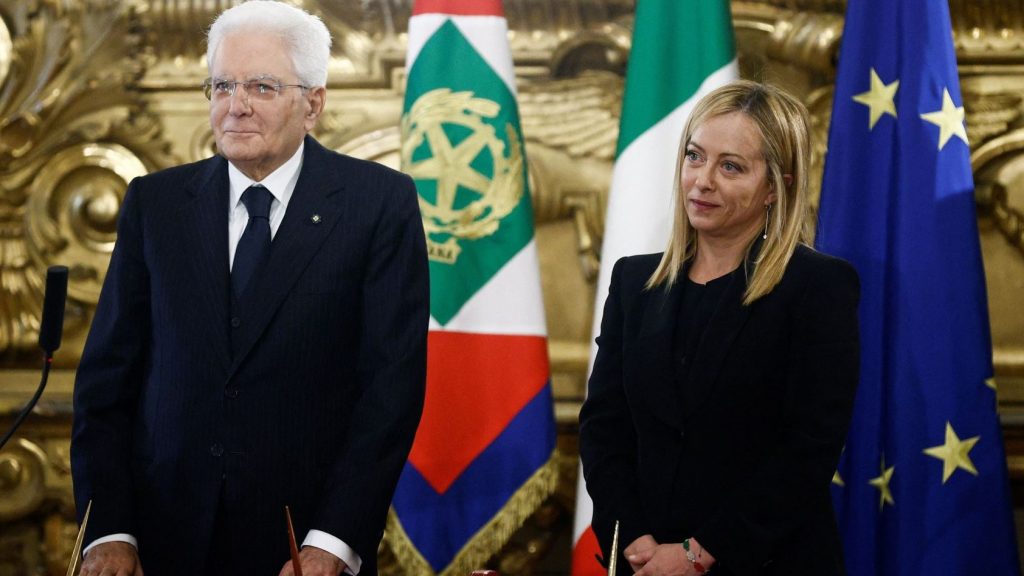 Italian President Sergio Mattarella is flanked by newly appointed Italian Premier Giorgia Meloni during the swearing in ceremony in Rome on Saturday.

At the time, Greek Parliamentary Representative of New Democracy, Christos Boukoros told EURACTIV Greece: “Naturally, the prevalence for the first time of a post-fascist political force in Europe’s third-largest economy is a cause for concern.”

In his view, the main concern in Europe should be why more Europeans are being driven to “extreme political choices”.

“It is time for Europe to start addressing the causes instead of commenting on the results as an impassive spectator.”

Also speaking with EURACTIV Greece at the time was secretary of the opposition party SYRIZA-Progressive Alliance, Rania Svingou, who said: “the ghost of fascism has reappeared in the country that gave birth to it.”

“In this difficult period for the future, the democratic, progressive forces in Europe have a historic responsibility. To fight with unity and determination a two-front struggle against the neo-fascist far-right, but also against the neoliberalism that feeds it,” she added.