In this week's Finshots Markets, we talk about Mazagon Dock Shipbuilders and see why the stock has been rallying of late

India spent a whopping $77.6 billion on defence and military capabilities in 2021! We were the third-highest spender in the world. Many would say that it’s money well spent to protect our borders.

But there is a problem here.

A good chunk of this money goes to foreign institutions. We’re actually the largest importer of arms in the world, accounting for almost 11% of the total global sales. Simply put, we haven’t done enough to create self-reliance or atmanirbharta on this front. And while in 1992 we set a goal to achieve 70% self-reliance, we were still at 38.5% in 2011.

But it’s been changing slowly over the years. Now, 64% of the Indian military budget is being set aside for domestically-produced arms. And it’s benefiting a select set of companies building for India — most notably Mazagon Dock Shipbuilders Ltd — whose share price has soared by 200% in the past 3 months.

Now MDSL has been around for centuries now. It began life in 1774 as a dry dock (where you drain out water to conduct ship inspections and repairs) in the village of Mazagon in Mumbai. The objective then was to service ships belonging to the British East India Company. And it was only in the 1960s that the Indian government looked at the company and said, “Hey, we need to relook at our defence manufacturing capabilities and can’t have the private sector waltzing about. We’re going to nationalize these guys.”

Since then, MDSL has lived life as a defence public sector undertaking (DPSU). If the Indian Navy wants a submarine, they turn to MDSL. If they want a destroyer that can take out enemy warships, it’s MDSL in the mix again. It has a virtual monopoly in these two domains. And in fact, it was MDSL that built the first ‘Made in India’ submarine named INS Shalki in 1992.

But why is there a sudden interest in the company now?

Well, to be honest, it’s not really sudden. When MDSL went public (IPO) in October 2020, people were clamouring to get a piece of the stock. On the day it was listed, its shares popped by 50%!

And there have been a few things driving this frenzy.

The first is the intention to go local. There are over 1200 defence components listed for indigenisation. Meaning India wants to produce these parts locally. And 144 parts go on warships made by MDSL. Granted MDSL won’t be making all these parts themselves. But they’re going to rely on private Indian players. The hope is that this will expedite sourcing and cut costs, boosting company margins.

There’s also the fact that the company has a massive order backlog of ₹43,300 crores — declared in August 2022. This isn’t revenue. It’s sort of a leading indicator that tells you all the projects in their pipeline that could translate to revenue over the next 24 months.

And finally, there’s the broad theme playing out that may aid MDSL.

It has to do with the Indian Navy.

But recently, India’s been playing a more strategic role in the Indo-Pacific region. We’re now part of the QUAD group that includes Australia, the US, and Japan. And it has ‘maritime security’ at the top of its agenda. And India will want to up its naval game a bit, especially considering the Chinese threat. See, China has 36 large surface warships and we have just 10. China has 105 small surface battleships and India has just 32. Our neighbour has 58 submarines against our 16. We need to beef up our figure.

And that’s probably one reason why our naval budget has seen a rise — from a 16% share of the overall defence budget to 19% in just the past couple of years.

But here’s the kicker…we aren’t just pouring money into hiring more personnel and maintaining the current fleet. Instead, it’s more about modernisation. We need massive ships that can house fighter jets and choppers; we need destroyers that can take out torpedoes; and we need quick, smaller corvettes to patrol the coast and keep an eye on submarines. Oh, and we need a bunch of stealthy submarines for ourselves too. So we’re building our navy fleet in a big way as part of India’s grand Maritime Capability Perspective Plan (MCPP). 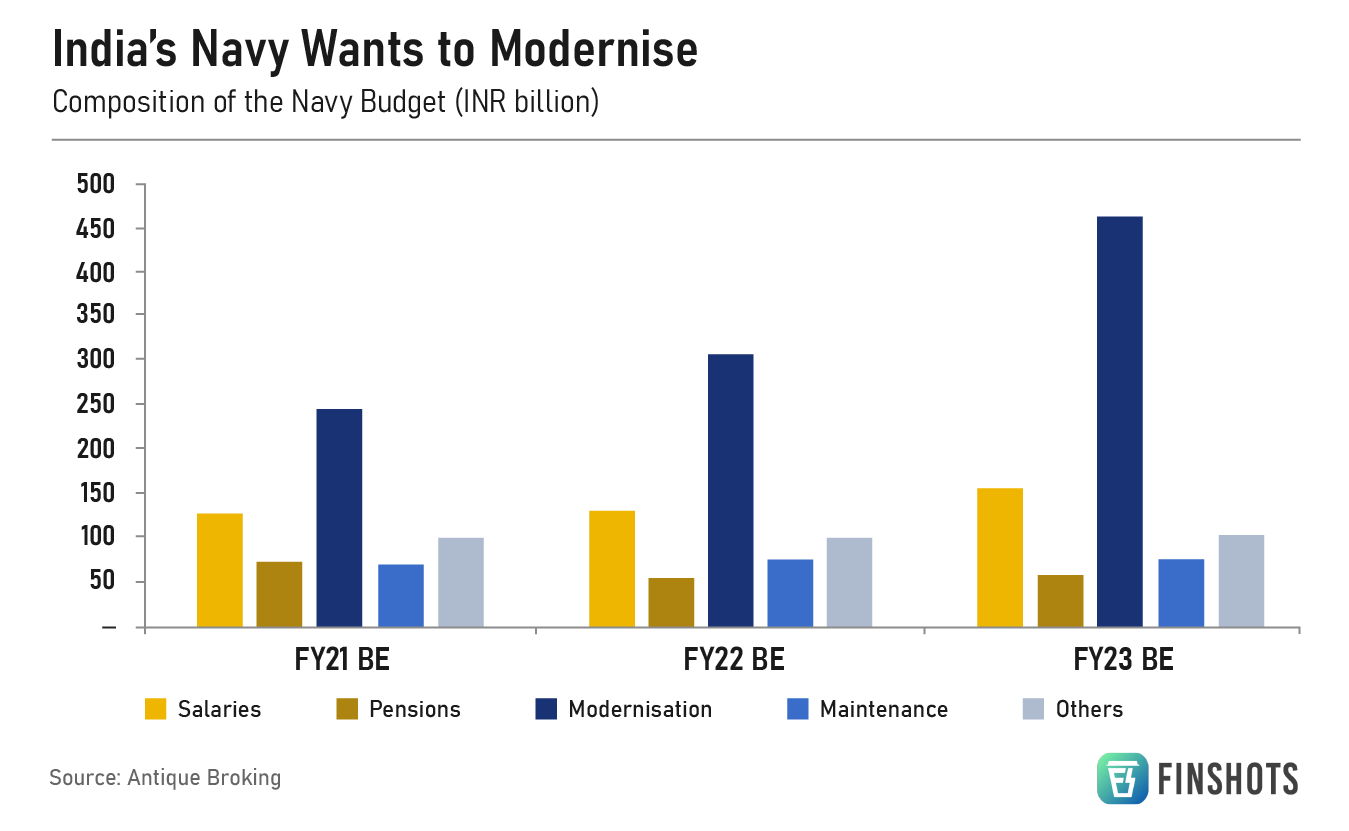 And you can imagine what this means for a defence PSU such as Mazagon Dock. Since the 1960s, MDSL has built 799 vessels, which include 26 warships — destroyers, missile boats, and submarines. They’ve been there and done that.

With major submarines & warships projects in the pipeline worth around ₹1.82 lakh crores over the next decade, investors are feeling quite gung-ho about MDSL’s prospects. 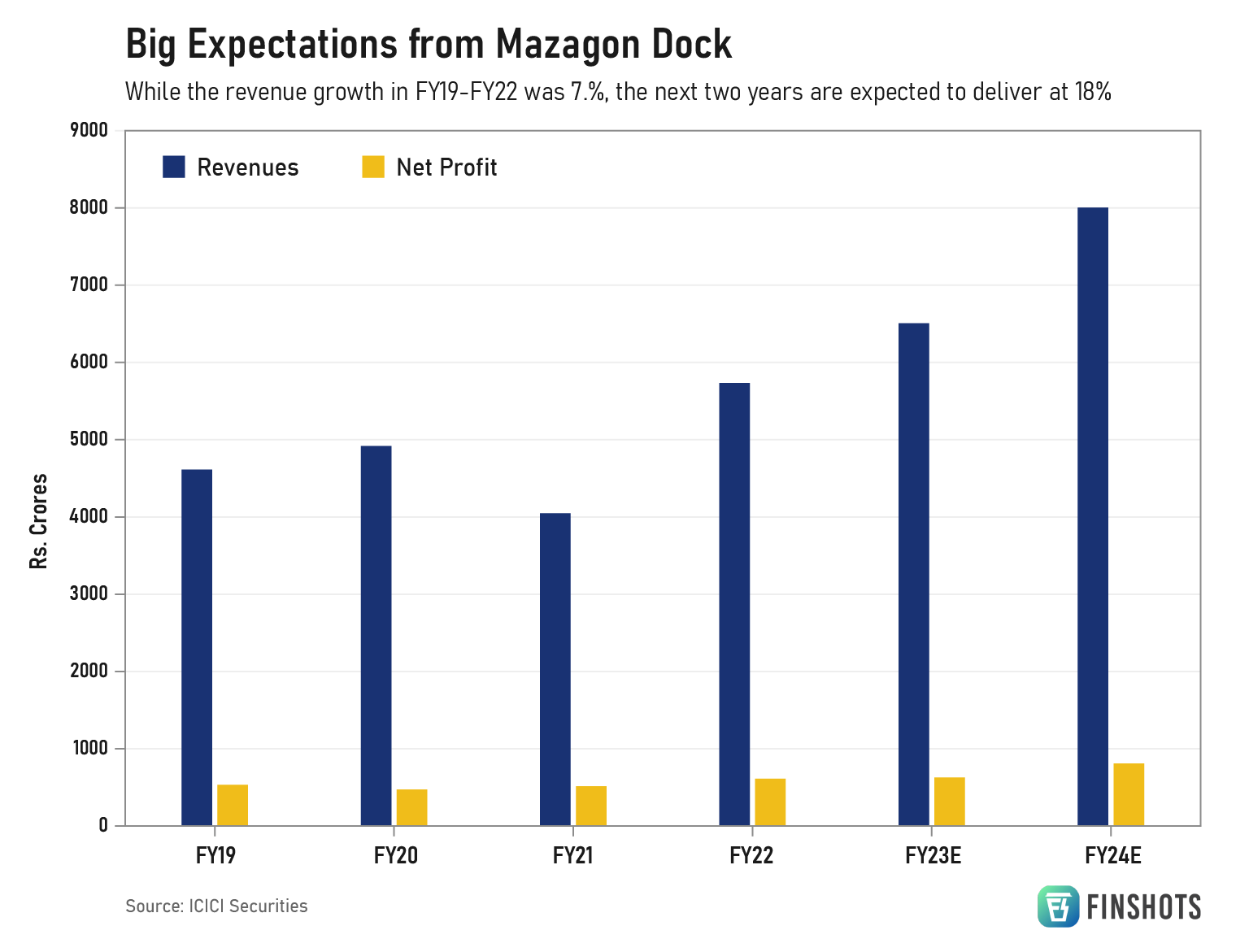 All this sounds great. But what’s the risk?

There’s the most obvious one of course — the heavy dependence on government projects. If the government does decide to pull back on its ambitious expansionary plans, that could be a big problem for MSDL.

Also, while MDSL has a proven track record, it still has to bid for projects alongside other Indian and international players. If they stumble, their top line could take a beating too.

And finally, MDSL is still a shipbuilding company. It hasn’t yet capitalized on the higher-margin ship repair business which just accounts for 3% of sales. Remember, shipbuilding takes many many years. Ship repairs however are quicker to execute. And if MDSL doesn’t step up, it could lose a chunk of what’s estimated to be an ₹18,000 crore market by FY30.

The question now is — have investors already priced in all this growth? Just 6 months ago, it was trading at a price multiple of only 10 times its earnings. Today, it has soared to 29 times. And that’s not cheap. Especially for a government-owned company.

So, does the stock still have steam or is it going to remain at the dock for a while? Well, you tell us.

Ditto Insights: Why Millennials should buy a term plan

According to a survey, only 17% of Indian millennials (25–35 yrs) have bought term insurance. The actual numbers are likely even lower.

And the more worrying fact is that 55% hadn’t even heard of term insurance!

So why is this happening?

One common misconception is the dependent conundrum. Most millennials we spoke to want to buy a term policy because they want to cover their spouse and kids. And this makes perfect sense. After all, in your absence you want your term policy to pay out a large sum of money to cover your family’s needs for the future. But these very same people don’t think of their parents as dependents even though they support them extensively. I remember the moment it hit me. I routinely send money back home, but I had never considered my parents as my dependents. And when a colleague spoke about his experience, I immediately put two and two together. They were dependent on my income and my absence would most certainly affect them financially. So a term plan was a no-brainer for me.

There’s another reason why millennials should probably consider looking at a term plan — Debt. Most people we spoke to have home loans, education loans and other personal loans with a considerable interest burden. In their absence, this burden would shift to their dependents. It’s not something most people think of, but it happens all the time.

Finally, you actually get a pretty good bargain on term insurance prices when you’re younger. The idea is to pay a nominal sum every year (something that won’t burn your pocket) to protect your dependents in the event of your untimely demise. And this fee is lowest when you’re young.

So if you’re a millennial and you’re reading this, maybe you should reconsider buying a term plan. And don’t forget to talk to us at Ditto while you're at it.

1. Just head to our website by clicking on the link here

4. Choose the date & time as per your convenience and RELAX!