There was a lot on the line for the Thanksgiving Day showdown between the New York Giants and Dallas Cowboys. Not only would the win help one of these NFC East rivals secure a spot in the postseason, but the winner got Nick Jonas. Actually, that last part wasn’t true, but considering Nick’s history with Dallas and the Giants, it added a little bit of extra excitement to the Jonas Brothers’ Halftime Performance on Nov. 24. When Nick, 30, Joe Jonas, and Kevin Jonasall hit the filed of AT&T Stadium for the halftime specular, the reunited Jonas Brothers brought the family vibes, along with their trademark flair.

Though the Jonas Brothers hail from New Jersey and are New York Giants fans – they grew up in Wycoff, just 20 miles from MetLife Stadium – they have some history with the Cowboys. Nick was actually born in Dallas, and the Jonas Brothers actually played the Cowboys Thanksgiving Day show in 2008, in what was the team’s last season at the Texas Stadium in Irving, TX.

“We couldn’t be more excited to return to AT&T Stadium and play The Salvation Army halftime show,” Jonas Brothers said in a press release. “We are honored that our performance will help raise awareness of the great need that exists and encourage everyone to donate to The Salvation Army to make a difference in their communities this holiday season and all year long.” 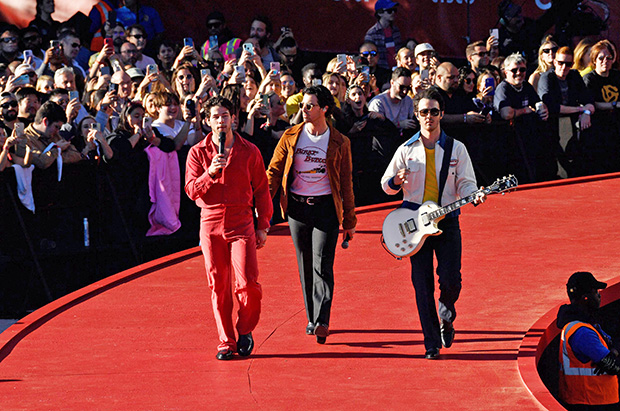 The brothers also announced the concert on their social media in October. The official @jonasbrothers account tweeted a picture of three Dallas Cowboys jerseys – No. 11 Kevin Jonas, No. 24 Joe Jonas, and No. 22 Nick Jonas – which also marked the date of the halftime concert. “It’s official! This Thanksgiving, we are performing the @SalvationArmyUS  #RedKettleKickoff Halftime Show during the @dallascowboys game! Tune in live on Nov 24th to help us kick off the season of giving. Game starts at 3:30 PM CT & you can watch on @NFLonFOX.”

It's official! This Thanksgiving, we are performing the @SalvationArmyUS #RedKettleKickoff Halftime Show during the @dallascowboys game! Tune in live Nov 24th to help us kick off the season of giving. Game starts at 3:30 PM CT & you can watch on @NFLonFOX pic.twitter.com/OWpr437n7Z

“The Jonas Brothers’ passion and generous spirit are just what we need to put a spotlight on the challenges facing so many millions of people this year,” said Charlotte Jones, executive vice president and chief brand officer for the Cowboys and former national advisory board chairperson for The Salvation Army, in the press release. “We are thrilled to have the Jonas Brothers perform on our national stage for a halftime show that I know will inspire hope and generosity.”